Describe a competition (or contest) that you have entered.

When the competition took place

What you had to do

How well you did it

Describe how felt about the competition.

Firstly I went to the starting point and registered my name in the competition. I took my bicycle I took my bicycle and wore my cycling dresses. I noticed there were around 30 competitors and I was asked to stand at my start point. With the sound of the whistle, I start cycling. I had almost no intention of winning prized but I simply did concentrate on cycling. The total distance was around 5 miles and that required some energy and time. After I finished the racing, I was really surprised to hear that I won the third prize. I found that some of my classmates were shouting because I was one of the three prize winners.

We were to read a couple of novels; I think 4 books, for two weeks. The novels were Madam Bovary, The Old man and only the first three guys were awarded. I should confess that I got a bit disappointed at first but later I thought about the benefits I gained. I mean I could read four good novels that were from among the best works in the world of literature. It is very interesting novels according to me. Merely participation in a competition or rivalry is an achievement in itself since in a competition you develop your self-confidence and self-esteem. You learn to be an unselfish winner and the patient loser.  As a matter of fact, you gain knowledge of your weak points and strong points. Last but not least, taking part in competition adds variety to your life.

English is spreading very fast in Today’ sword. To what extent do you think the advantages of this situation outweigh its disadvantages?

Describe any food that you would like to the first-time try. 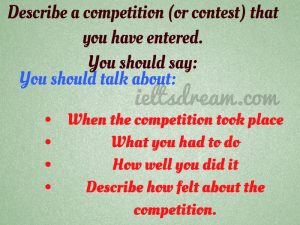