You should talk about:

Why TV commercials are important to us

What factory sponsors that

What it is about

You Know Some people who watch TV quite often believe that TV commercials are better than the programs. There are several advertisements that we see on the TV daily and some of them are very boring and others are average while some are very interesting and creative. I think TV commercials add the variety to the programs because sometimes the program becomes very monotonous. One such advertisement that I really liked was regarding the unmatched contributions of mothers for their kids which I saw a few months back. The advertisement was broadcasted for the ‘Mother’s Day’ and it was not for any product. The ministry of child & mother care of health department was the sponsor of this ad and I saw it 3-4 days before the last ‘Mother’s Day’.

This advertisement was a very creative one and it was not like the most other advertisements that publicize or advertise their products. Rather it was an advertisement dedicated to the mothers and it reminded us that the toughest job in the world is the job done by mothers. They take care of their kids with the utmost care and dedication. They sacrifice their own wished and will to properly bring up the kids. I like very much this advertisement.

This was a creative and that effectively delivered the message it intended to. It has shown some successful person in the history at the end and before that, it showed how mothers are taking care and inspiring their kids to do good things and in the end, it shows the tribute to the mothers of the world for their valuable and second to none contribution.

It is generally acknowledged that families are now not as close as they used to be. Give possible reasons and your recommendations. 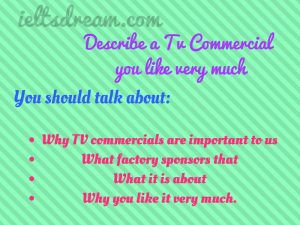