It is important for children to learn the difference between right and wrong at an early age. Punishment is necessary to help them learn this distinction. To what extent do you agree or disagree with this opinion? What sort of punishment should parents and teachers be allowed to use to teach good behavior to children?

Some people believe that children should be taught what is right and what is wrong from the time when they are young enough and the kids should be punished if they do things they are not supposed to. In my opinion, applying punishment is the right way of raising children. However, I’m strongly against the use of physical force to teach good behavior. It is important for children to learn the difference between right and wrong

First and foremost, there is a saying which goes “Things learned in early age are same as an inscription written on a stone.” In other words, whatever a person learns as a kid, that stay with him for the rest of his life. Since children don’t have enough knowledge of the world and aren’t aware of the consequences of their own deeds, they might do whatever they feel like to do. For instance, instead of doing school homework on his own, he may just cheat from a smart student in the class. That would be the easiest solution to his small problem but educators should ex[plain this with great care. It is important for children to learn the difference between right and wrong

It is totally common for not only kids but also adults to make mistakes, things they shouldn’t do. Then the guilty party should be punished. I strongly believe, kids who are mischievous or disobey should not be punished physically. That might cause trauma to them. Consequently, they may turn into coward kids or may alienate themselves from older people. Instead, other types of punishment such as depriving of whatever they favor should be applied. As we know, most of the kids are really into games, especially electronic ones, taking away those electronic gadgets, if kids disobey parents or give up doing homework have better results, I assume.

To sum up, taking into consideration the fact that raising children is one of the toughest tasks in the world, educators should be very careful to punish the mischief but by voiding punishing physically. 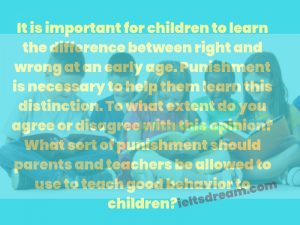