Many young people in the workforce today change their jobs or careers every few years. Do the advantages of this outweigh the disadvantages?

Due to a surge of competition in almost every field people’s working habits have changed dramatically. Therefore, most of the youngsters like to change their jobs in some years. This tendency has some advantages and disadvantages too. Both the aspects will be analyzed before providing a logical conclusion.

The foremost advantage of this global phenomenon is in terms of career growth. Individuals like to do shifting of work for their career progress. Sometimes, they get better opportunities from some other organization due to which enhancement of their career is possible. For example, In the USA, the records revealed that approximately 40% of people change their workplaces not more than 5 years as per a report published by an employment agency? In June 2017. Furthermore, another benefit is that inflation is also rising so as to provide a better lifestyle for family people change their job frequently.

Despite having benefits, this thinking has some drawbacks too. Rapidly change in jobs can affect the employee’s reliability towards the company. Swift movements are obviously a negative aspect which will be added in their resume. so, new employers will think twice before giving jobs to such employees. As in India, approximately 1,00,000 people are without jobs due to their rapid shifting in companies. Survey aired on news channel in 2018 confirmed the same. Furthermore, it may take too much for a new recruit to adjust to the new environment of a changed company. Sometimes the conditions may be too harsh for them which may lead them to depression and anxiety.

To conclude, people change their careers due to positives like personal growth and a better life for a family. On the other hand, disadvantages like lack of reliability and mental pressure cannot be avoided. I still believe that the benefits of this trend definitely surpassed its negative outcomes. 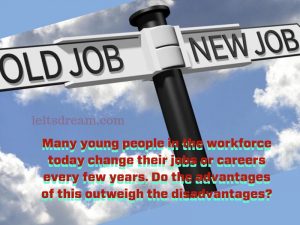