Due to the powerful influence of modern mass media, appreciating the same movies, reading the same books and wearing the same brands of clothes in different parts of the world has become a reality. Is that phenomenon really beneficial to us?

There is no denying that the media provides a valuable platform for us in different countries to know each other. For example, classical traditional Chinese books such as the journey to the west or Romance of the Three Kingdoms, are efficient ways for westerners to enjoy resplendent Oriental cultures. The inevitable destructive disadvantages, however, should not be ignored.

Initially, if everything we watch on screen is exactly the same, the world would really be dull and monotonous. As the saying goes,” nothing endures except change.” No matter how wonderful certain arts are, the same without any innovation will lose attraction sooner or later. furthermore, if there is no difference among books, films or even music, then no competition is existent, and not to mention mutual improvement.

Secondly, the sameness in books or films will result in the extinction of some cultures. Apparently, cultural influence, because of individual economic power, is far from being identical. In order to attract more audiences to make more profits, the media authorities have to give priority to those mainstream cultures. So, step by step, certain lesser-known cultures will lose their opportunities to make them known and be on the verge of extinction. if this is true, the media will become a culprit in abolishing cultures rather than serving as a bridge among differences of the world.

Indeed, numerous benefits have been brought about by similarities on the media, and we, however, have to be more than alarmed about its detrimental effects.

We live today in an electronic information age. It is easier to be connected by technology, yet many people still seem distant from each other and feel unhappy in their lives. Discuss.

The government should control the amount of violence in films and on television in order to decrease violent crimes in society. To what extent do you agree or disagree with this point of views? 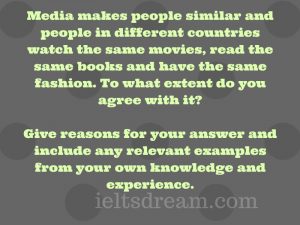