The given table shows the percentage of household consumer durables sold in the UK from 1972 to 1983. It can be divided into three groups. 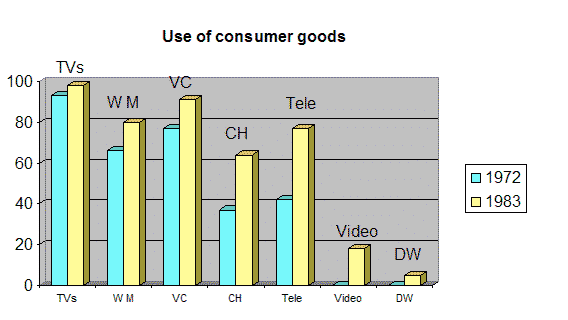 The vertical bar graph elucidates the information regarding the utilization of goods namely television, washing machine, vacuum cleaner, central heating, telephone, in Britain between1972 to 1983.

Overall the most striking feature is that among all the appliances television was most eminent item among the masses and negligible usage of items were videos and dishwater during the given tenure.

As is presented in the bar graph, television and vacuum cleaner were always renowned in the Britain during the time scale, 94% and 70% respectively in 1972. However, in 1983, former reached at zenith point (90%) and latter attained greater increase about 90%. The third most popular item was washing
machine, initially its consumption by English families were 63% whereas at the end of the year its consumption was increased and reached at the four-fifths. With regard of central heating, the use of telephone was higher in 1983. On the other hand, the consumption of both items were more or less same around 40% by 1972. Both videos and dishwater were introduced in 1983 and merely 18% British families had watched videos. After that, the minority of utilization of dishwater by English families.