Rich countries often give money to poorer countries, but it does not solve poverty. Therefore, developed countries should give other types of help to poor countries rather than financial aid.

Give reasons for your answer and include any relevant examples from your own knowledge or experience.

In this contemporary world, some rich nations help to aspects. But a camp of society thinks that developed nations ought to help in other ways instead of giving financial help to them. According to my points of view, helping to poor nations with money is a good way to help them but developed countries should help to less developed regions in other ways such opening branches of multi-national companies, direct job offers to citizens of undeveloped nations and so on. I will elaborate it in the following paragraphs of this essay.

On the one hand, rich nations can help undeveloped countries by taking another step rather than giving financial help. Firstly developed nations can open branches of their own big organizations in several cities of poor countries Due to this, citizens of undeveloped countries will get employment opportunities. They will receive better compensations which can be proved good for an economy of their developing nations as well as a living standard of countrymen will become higher than earlier times Secondly developed countries can give direct job offers to wise and knowledge workers of poor nations. as a result of it, employees will learn new technological skills by working in developed nations. So when they return to their countries then, they can apply these skills in developing a process of their nation. Though this, economic situation of a poor nation will become strong.

on the other hand, when a developed nation gives financial aid to an underdeveloped country then, public sector of that region can use it as they want. In other words, a government can use it in all fields of the country. for instance, in India, Prime Minister Narender Modi has got money from America and decided to use it in transportation basic modern facilities and so on, recently he invested this money in the development of India.

To conclude, According to my point of view, developed nations can kill two birds with one stone by giving help to poor countries. Because it leads to a strong and peaceful relationship between them. I believe it is a good thing that rich countries give financial aid to underdeveloped nations but they should use other alternatives for helping poor nations in their development processes.

Nowadays we are seeing more and more exhibitions and sculptures appearing in public places. It is wrong that governments are funding artist projects when there are more important things we could be doing with tax payer’s money. To what extent do you agree or disagree with this opinion? 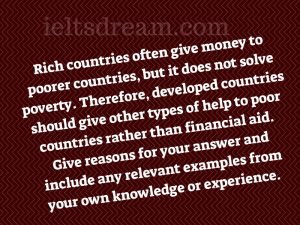