In some countries, people think women should have equality with men, in particular, equal rights to work as police officers or serve in the army. Other think women are not suitable for such jobs. Discuss both views and give your own opinion.

It has become a debatable topic in some nations, whether or not women should be given equal right with men, most especially when it comes to professions like being a police officer or serving in the army. This essay shall discuss both perspectives, however, in my opinion, women should have an equal right with men because there are some tasks that are best performed by women and it makes them more relevant in the society.

The idea of letting women have equal rights with men is a welcomed development; this is because it makes them relevant in the society. In other words, women do not feel inconsequential if they are given the same right that men have in the society, they feel involved, carried along and respond to a course. The position of women in most societies is relegated to the back because the society feels they most societies is relegated to the back because the society feels they don’t have much to offer, whereas, giving them an opportunity a male child has gives them a platform to prove themselves and become relevant members of the society. Another reason why women should be into some careers is that there are some tasks that are best performed by women and using a man for such an operation may have a colossal potential for failure. It was explicit in the united states military journal that “women are best used for undercover and surveillance mission than men.” Disengaging women from such fields imply minimal output from such operations.

Giving women access to some jobs in good, however, some societies oppose this idea for certain reasons, one of which is the fact that tasks involved in some careers are arduous and not suitable for women. In other words, some jobs are considered unsuitable for women because the tasks involved are strenuous and challenging. For examples, to serve in the army, there are series of hard training that would be undergone which a female child may not be able to cope with. Another reason why people protest against equal rights in professions is that women are believed to be a homemaker and should not engage in careers that would make them utterly useless to the family.

In conclusion, giving women equal rights with men gives them relevance in the society, while on the other hand, they may not be able to cope with the rigor associated with some professions. However, in my opinion, women should be giving equal right to men in the society should not be denied employment in some fields. 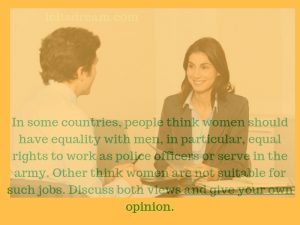