The diagrams below show the stages and equipment used in the cement-making process and how cement is used to produce concrete for building purposes. Summarise the information by selecting and reporting the main features, and make comparisons where relevant. 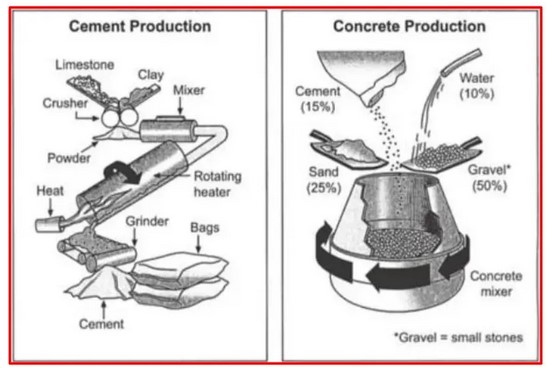 The diagram illustrates the process and tools used in the cement-making process and how cement is used to prepare concrete for building purposes.

Broadly speaking, the most important thing used in cement production is that limestone and clay. There are five stages in the preparation of cement manufacturing.

As can be seen from the diagram, limestone and clay are put into a crusher to make it as a powder. Afterwards, it is passed to a mixer which is then passed to a rotating heater to heat, followed by grinding using a grinder which finally turns into a block of cement. Afterwards, cement is the pack for marketing purposes.

It is clear from the diagram that the concrete is produced using four main ingredients, which are cement(15%), water(10%), sand(25%) and gravel(50%). These are put in a concrete mixer to make concrete followed by it is used for making houses and buildings.

The images depict the cement production process and subsequently how it is utilised to make concrete. Overall, both techniques have a number of phases, beginning with the mixing of limestone and clay and ending with the manufacture of concrete using a mixer.

Limestone plus clay are crushed together in a crusher to generate a powder in the first stage. The powder is then placed in a mixer before being placed in a revolving heater. Heat is imparted to the powder while it rotates in a clockwise direction, and the Product is ground in the grinder till the cement is created. The completed product is then placed in bags so that it may be utilised to make concrete at a later time.

According to the second diagram, 15% of the cement produced is combined with 10% water, 25% sand, or 50% gravel (small stones). All of the components are dumped into a concrete mixer, which produces concrete by rotating clockwise.