The line graph shows the channel one news viewing figures per day in one year. Summarize the information by selecting and reporting the main features, and making comparisons where relevant. 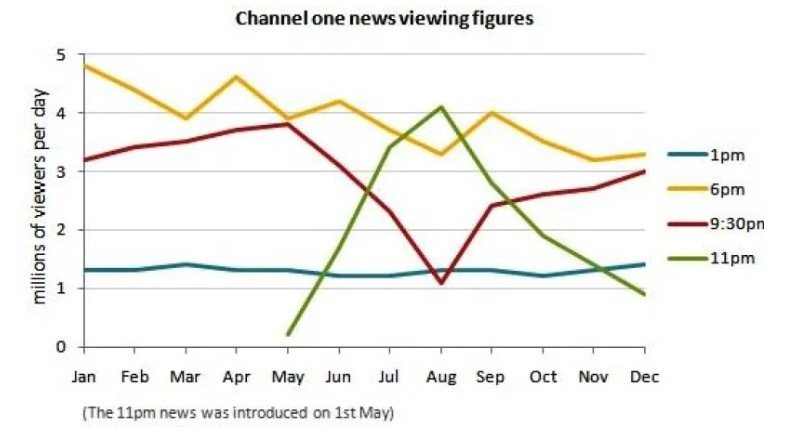 The line graph depicts the viewer’s figure of 1 year who had seen channel one news in one day.

Overall, the viewers who had seen evening news were highest in the starting month, whereas at afternoon time there was so less population watching last news.

At first glance, 1 pm shows had seen by above 1 million in January, and very less democracy increased from November, till then the viewers’ population were stable. However, on 6 pm news, a large number of citizens watched it in January, and until December, there were so many ups and downs in proportion, but in last they were under 4million in a day. When it comes to 9:30 pm news, channel one was seen by above 3 million people and from May to August the growth gradually markdown, but in September it surge and the numbers reached to 3 million.

Moreover, from May 11 pm, news started, which was seen by most people till August, but from the end of the math, the viewers list deliberately came down to 1 million persons per day.