The pie charts show the electricity generated in Germany and France from all sources and renewables in the year 2009. Summarize the information by selecting and reporting the main features and making comparisons where relevant. Write at least 150 words. 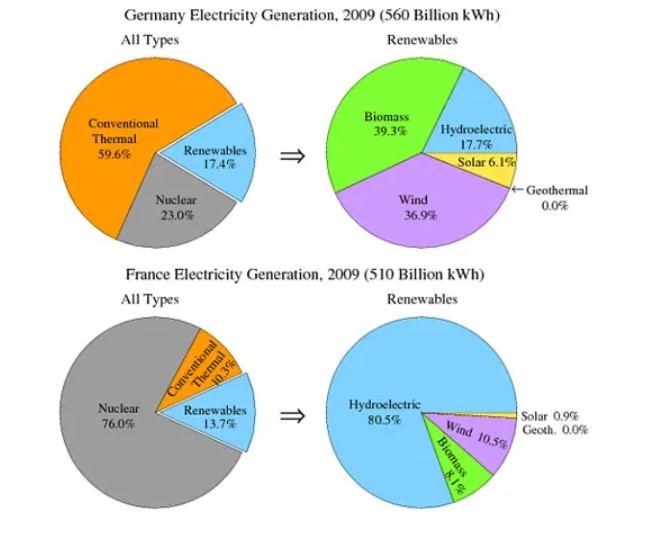 The rendered pie charts compare the percentage of electricity production in France and Germany from three different sources such as renewable, nuclear and conventional thermal in 2009.

Having a Cost of a fleeting glance, it is clear that in Germany, three-fifths of the total energy production was from the conventional thermal method in 2009 at 59.6%, and the nuclear and the renewable sources produced 23% and 17.4% of electricity, respectively. Moreover, classification of renewable sources, biomass generated 39.3% of electricity and was closely followed by the wind at 36.9%. Meanwhile, there was no power generated from geothermal sources.

Proving further, France depended more on nuclear sources than electric power at 73%, which was almost three-quarters of the total electricity production. Next to this, hydroelectric power was the most efficient renewable energy source in France with 80.5%, while energy produced from solar walls was merely 10.5%. Interestingly, like Germany, France also did not depend on geothermal resources.

Overall it is crystal clear that Germany produces more electricity from conventional thermal methods, and nuclear energy was the main power source in France in the period 2009.