The Pie Charts Show the Electricity Generated in Germany and France from All Sources and Renewables in The Year 2009. Summarize the Information by Selecting and Reporting the Main Features and Making Comparisons Where Relevant. Write at least 150 Words. 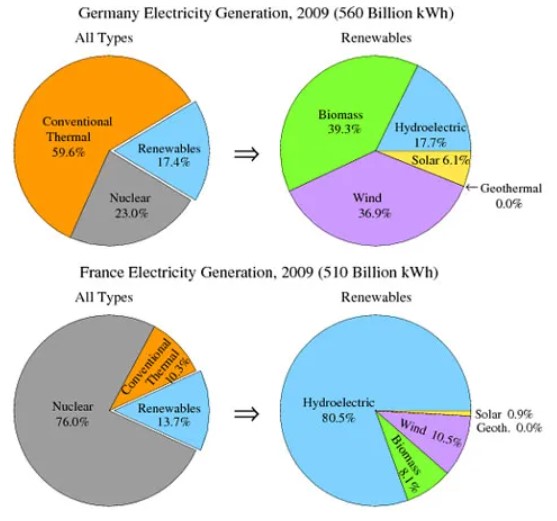 There are 2 pie charts per nation, which illustrate power produced in Germany and France in 2009, one pie chart shows electricity from every source which is broken down to conventional thermal, Renewable and nuclear and the other further breaks down the Renewable sources into five categories .overall in Germany conventional thermal contributed the most power while in France it was Nuclear.

As for renewable sources, hydroelectricity accounted for a major 80.5 % while in Germany it was 17.7%, biomass energy was the major source in Germany at 39.3%and a mere 8.1 % in France. Wind power was the second-largest contributor in Germany at 36.9% and 10.5 in France. Solar and Geothermal were the least used in both countries.