University graduates receive higher salaries than those who have a lower education, therefore some people say such students should pay for all their tuitions fees. To what extent do you agree or disagree?

A general phenomenon that college students should bear the total expense for their tertiary education has reached such proportions that people feel this undeniable fact that college graduates usually receive higher salaries for similar jobs than those without a college degree should be taken into consideration.

this fact rests on an assumption that it is always the case that people with higher education earn more money than less well-educated ones. But salary or income is, in most cases, based on contributions made by employees to organizations in which they are employed. according to the wage-maintenance at the average level in the labor market, it indicates that human resources departments prefer people with professional training than college graduates and that blue-collar worker who do not hold college degrees are also becoming the rage at the labor market. The preferences of employers are to hire and pay more to highly skilled and specially trained people rather than fresh college graduates. in the hand- making an industry, for instance, skilled workers make two or three times more than their college-educated counterparts who make the average salaries in other factories. And it is widely accepted that people’s income is determined more by talent, hard work, and willingness to take than solely by certain qualifications such as college education.

Moreover, the goals of education show that it is even more problematic for the country to throw all the responsibilities of financing college education to college students. the goal of tertiary education of a nation is to improve and strengthen the general level of intellectual and professional capacity of its labor force, thereby increasing the competency of the nation in the global economy. through the statistics of tax income from the government, parents all contributed to the education system and country in various ways. It is only reasonable and necessary that the country gives some forms of financial assistance to students to ease the tension of rising education costs. Such help should go to not only students from poor families but also outstanding students from affluent backgrounds. It is understandable that the general quality of people in a country will improve and its economy will benefit both now and in years to follow.

In conclusion, a student should unify their efforts to support universities for helping them to meet their ideal condition. Not only would it bring upsides to students, but it would also result in benefits to society. Besides, it could somehow show the right way of securing a career and not confronting with unemployment difficulties.

Some people think sending criminals to prison is not an effective way to deal with them. They think education and training are better. To what extent do you agree or disagree?

The space travel to the moon cited the words” a step of the mankind”. someone thought it has made little influence on our daily life. To what extent do you agree or disagree with this opinion? 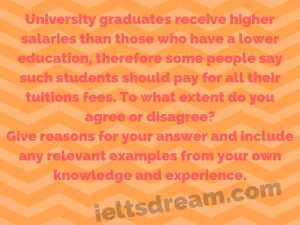