Genetic engineering is an important issue in modern society. some people think that it will improve people’s lives in many ways. Others feel that it may be a threat to life on earth. Discuss both opinions and give your opinion.

Genetic engineering is an important issue in modern society. Genetic engineering can broadly be defined as modifying the genes in a human body for various medical reasons. Certain purists believe that it is sacrilegious to play with God’s best creation that is the human body while reformers think otherwise. This essay will weigh both opinions, though I firmly support the latter.

Human cell cloning is a branch of genetic engineering that hopes to clone humans. The first scientifically clone sheep, Dolly Caused a furor as the world decried scientists who were trying to play God. However, there have been no success stories for cloning humans till date, though science may have some success in the upcoming future. This may be a cause of concern for those who believe that humans must procreate and not tech labs. Test tubes babies, however, are boon for infertile couples and a blessing for those yearning for their own progeny.

Another branch of genetic engineering is stem cell research. it is essentially harvesting the cells from the placenta and transplanting in event of any gene related anomalies. It has seen to be beneficial to certain potential who suffer from thalassemia and sickle cell anomaly. parents who have lost several children to known hereditary issues are singing praises of this bioengineering feat. Thus, it is proving to be a boon to those who have been given a second chance to live.

All in all, I believe that if genetic engineering much like all inventions, if wisely used will be the trailblazer to conquering genes related diseases. I believe no stone should be left unturned to ensure its research and development. 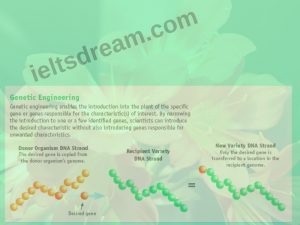