The graphs below show the types of music albums purchased by people in Britain according to gender and age. Write a report for a university lecturer describing the information shown below. 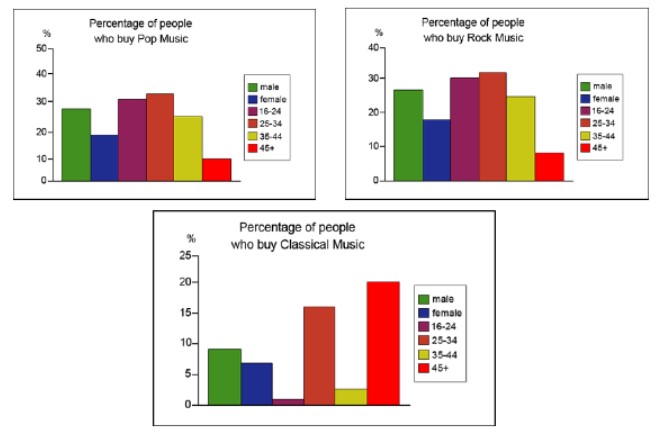 The graph below illustrates the collection of songs bought by the people in Britain according to gender and age. Overall, it can be observed that more people are buying pop music and rock music whereas classical music is being bought less compared to pop and rock music. And the number of buyers is shown in percentage along with age group.

The collection of pop and rock songs is being purchased more in the age group of 25-34, which is near about 31 %, and classical music buyers are half of this if we see males getting more collections than the females in all three music collections.

On the other hand, the age group 45+ spends the least amount buying pop music and rock music, which seems to be only around 10% of people. And the classical music purchase is the opposite because 20% of people buy this music which is the highest of all three types of music. The age groups 16 to 24 and 35 to 44 are very few buyers of classical music as it is being purchased only by 4% of people and the same age groups between 25% to 30% of the persons are buying pop and rock music.

All three collections of songs are being bought by the different gender and age groups of Britain citizens, which is slightly different in each age group.