Different cultures are mixing today ad the world is becoming a global village. Is it a positive or a negative development? Give your own opinion and examples.

In the last couple of decades, people around the globe are much more connected than earlier. Hence, different cultures are blending with each other, resulting in a global village. In this essay, I will discuss the pros and cons of this trend with my support towards its positive side.

On the one hand, nowadays, people can travel to other countries without any hassle which could have an adverse impact on the local culture and environment, especially in the second and third world countries. Because the influx of tourists can bring some mischievous people who can create an issue by ignoring the host culture. In addition to this, the majority of the developing countries are depending on nature for their survival. Thus, a number of tourist results in more garbage, and many of these countries lack a proper system to mitigate this waste. As a result, not only local people are at risk of health problems but in the long run, it also destroys the surrounding ecosystem. For example, a few years back beaches in Phuket were clean but now they are full with plastic waste due to a higher number of tourists visiting there and leaving their garbage, which the system is not efficient enough to handle the pressure of this large number of tourists.

On the other hand, this phenomenon has bought many benefits to the people. Firstly, the business tycoons can sell their products anywhere in the world at a lower cost. This is because they have to spend less amount of money to prepare their marketing strategy to understand the consumer in the foreign countries. In other words, the marketing research and promotion cost have come down due to people living in the world are having the same taste and preferences. For example, McDonald’s sells the same French fries on the globe without any customization in its taste because there are no more gaps between different cultures. Addition to this, when people migrate to other countries then they will not suffer from culture shock. This could happen because they are aware of any changes in the culture

which they are going to face. Hence, they can easily integrate into a new country and they tend to become more tolerant as compared to others.

In conclusion, although there are some risks on culture and environment of the host countries, however, this could be addressed with the proper planning by the government. Hence, I believe the advantages of global village out weighted any or all its disadvantage. 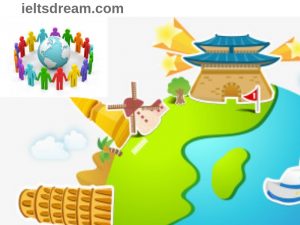