Some people think computers do not help children to learn more effectively, on the contrary, their usage has a negative effect on both the physical and mental development of young people. To what extent do you agree or disagree?

The computer, one of the greatest inventions of the 20th century, has brought invaluable benefits to the entire human race. Children, as the future of our generation, inescapably carry on their shoulders the responsibility of learning and using computers to extend this benefit. However, having learned from facts, some have worried that getting access to a computer at a very young age may undermine the health of children. This essay will display a further discussion on this topic with exemplifications on both views.

The times we are living in is defined as the computer era on account of the massive prevalence and the highly intensive application of computers. A majority of the current occupations are being computerized to achieve systematic and efficient performances.

To say our world will instantly be paralyzed with even one minute’s absence of the computer system is not an exaggeration. The mission of making this world continue its running lies in our offspring. Nowadays, children start learning computer skills at a very young age. Many of them excel in a firm grasp of all kinds of computer-based knowledge. For this, we shall say we are proud to have such outstanding successors.

Nevertheless, we shall not ignore the facts that many children failed to use this modern technological invention in the right way. Instead of taking it as a tool for learning, they developed its other less educational but perhaps more fun functions. Children have been repeatedly reported spending hours chatting aimlessly on-line or exhausting all their energy playing cyber games. Even worse, without a proper internet filter system, they are quite likely to access content that is inappropriate for their age, Which might affect their health and even lead them to crime.

With the above-presented demonstration, I’d like to draw my conclusion as follows. It is of great importance for children to learn computer as a life-long skill under the strict supervision of adults who know when and where to draw the line and set up a healthy and progressive plan for them to learn it.

Some people believe that students who want to go to university after graduation from high school should have a year off to get a job top to obtain work experience or travel to widen their vision. What are the advantages and disadvantages of it and what is your opinion? Give a reason for your answer and include any relevant examples from your own knowledge and experience. 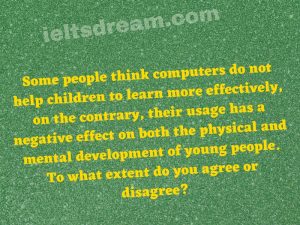 2 thoughts on “Some people think computers do not help children to learn more effectively, on the contrary, their usage has a negative effect on both the physical and mental development of young people. To what extent do you agree or disagree?”