Some people think women should be allowed to join the army, the navy, and the air force just like men. Do you agree or disagree?

In the contemporary world, in any truly enlightened and progressive countries, women play essential roles in the political, economic and cultural arenas as men do. Yet whether ladies should be entitled to serve in the military has triggered spirited debate. Some assert that the status quo should be changed and ladies should be enabled to join the armed forces. Speaking for myself, I fundamentally agree with their assertion for three reasons.

In the first place, history has shown that women are fully capable of performing well in the military. Historically, there were a host of valiant women soldiers whose achievements really put their male counterparts to shame. One need only look at the classic examples of Joan Of Arc and Mulan to see how exceptionally ladies can perform on the battlefield. according to my observation, their determination, courage, and dignity, to this day, are still being admired by male soldiers and civilians alike throughout the world.

In the second place, from an enlightened standpoint, female patriots should be granted the right to go to the front line when their motherland is involved in a war. Admittedly, gender inequality was a highly controversial issue in the twentieth century. However, now eight years into the new millennium, women can learn and teach, work and supervise, vote and get voted in most countries just like men. Given this sweeping progress in gender equality, there is really no sense in denying them the right to defend their home country when war breaks out.

Lastly, a common sense and our experiences as humans inform us that would be servicewomen largely posses the capacity to operate modern weapons. Indeed, present-day weapons are best characterized by extensive automation. Granted, physically women are on average not as men nevertheless, it is an indisputable fact that most of them have the mental ability and the psychological well-being to operate the highly automated arms that do not really require big biceps.

In conclusion, Keeping military services out of bounds to women in the information age in unwarranted. And I am convinced that it is in the best interest of a nation if ladies are also granted equal granted rights in this respect.

The only way to improve safety on the road is to give driving offenders stricter punishment. To what extent do you agree?

Many people are optimistic about the 21st century and see it as an opportunity to make a positive change in the world. To what extent do you agree or disagree with their optimism? What changes would you like to be made in the century? 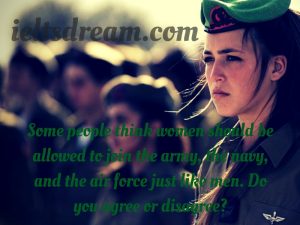