The diagrams below show the life cycle of the silkworm and the stages in the production of silk cloth. Summarise the information by selecting and reporting the main features, and make comparisons where relevant. Write at least 150 words. 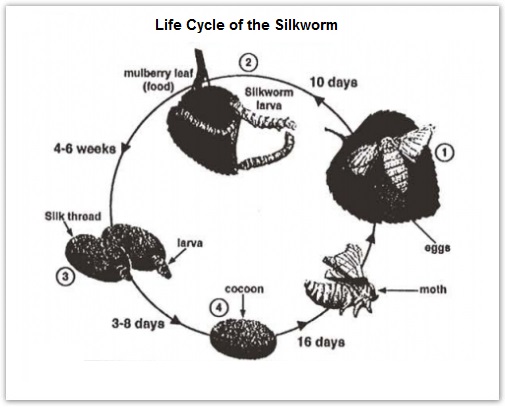 Different phases for creating the silk cloth by silkworm with their name and time to complete that procedure has been described in the given process cycle diagram.

Starting from the origin of eggs to the creation of silk thread, it mostly takes some weeks, and again, from that to regeneration of eggs, it will take some days. The process of generating silk thread by silkworm larva has taken the longest time, whereas cocoon creation from larva has taken the shortest time among all processes of silk generation.

Initially, moths give eggs, which eventually birth a silkworm. This process mainly took around 10 days. Silkworm eats mulberry leaf as their food. Around 4 to 6 weeks, it takes to create a thread of silk using larva. The majority of the time in the silk production process goes in this stage, whereas other processes take less than 3 weeks to complete individually.

After that, 3 or 4 days are required to create a cocoon, which will become a moth within 16 days. Again the moth gave birth to a new silkworm by breeding eggs, and the cycle has been continued for silk creation.

Also, Read The bar chart below gives information about vehicle ownership in China.