The chart below shows the internet users (in millions) in different countries in the Middle East as of June 2017. Summarise the information by selecting and reporting the main features, and make comparisons where relevant. 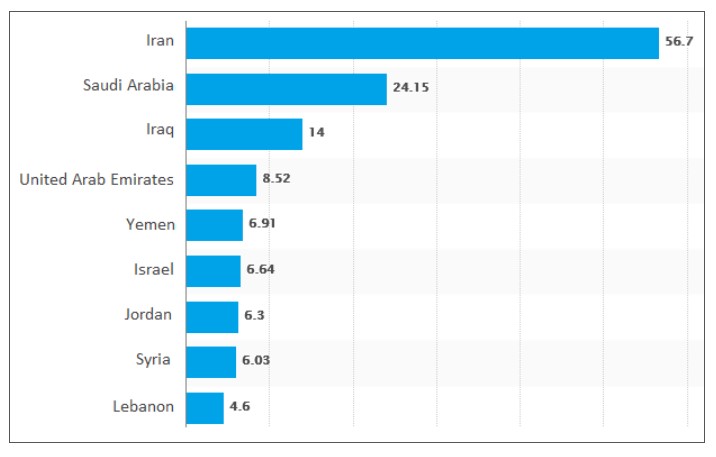 The given bar chart illustrates the data about the internet users in nine different countries situated in the middle east, and this information is collected on a specific date in the count of millions of people.

To initiate with, the majority of people in Iran have used the internet at a high pace whereas, only one-twentieth used the internet in Lebanon country. The count of Iran users is near two-third. Saudi Arabia was the second country after Iran, in which 24.15 million people are surfing on the internet per day. Between the countries Jordan and Syria, the number of people was varied by 0.27.

Moreover, in Iraq, the number of internet users was 14 million. And, for the United Arab Emirates, it was slightly more than half in comparison to the Iraq citizens. Similarly, in Yemen and Israel count is lie between 6.5 and 7 million.

To conclude, the number of internet explorers in six countries lies between 4.5 and 8.5. for the remaining ones, it differs by the large number, and Iran people are more interested in using the internet.

Also, Read Some Claim that Studying Abroad Has Great Benefits