The Pie Chart Below Shows the Percentage of Five Kinds of Books Sold by A Bookseller Between 1972 and 2012. Summarize the Information by Selecting and Reporting the Main Features and Making Comparisons Where Relevant. 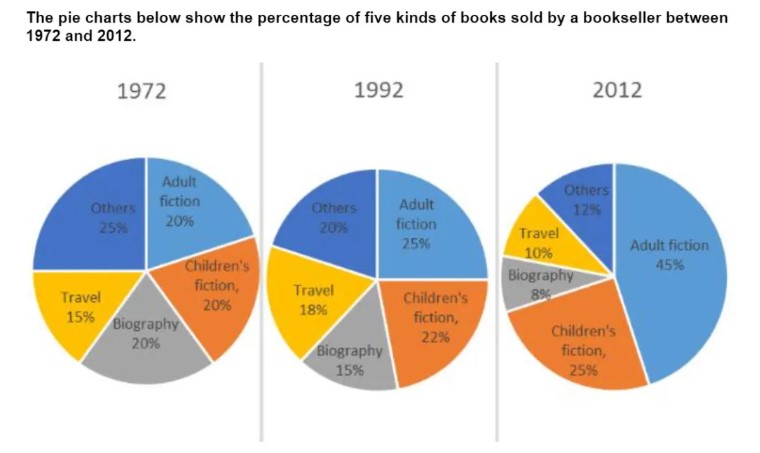 The pie chart illustrates the information regarding the shopkeeper who vended the five types of books, namely Adult fiction, children’s fiction, Biography, Travel and others during the year 1972 to 2012. The data has been calibrated in per cent.

Looking at the overall perspective, it is readily apparent that the maximum amount of adult fiction books were shared by sellers in the given period. In contrast, the least context was shown by travel books.

Apparently, it is crystal noticeable that in the initial year, the Adult fiction, Children’s fiction and Biography books sales percentile remained the same, which were approximately one-fifth orderly. Then in 2012, the percentage of Adult fiction books was telecasted, which was almost reached half. Apart from it, the vended of travel notebooks percentile showed a marginal difference of 3% in the comparison of biography books.

Turning towards the remaining data, the sale of the other subject notebooks was only 12%.In contrast, the sale rose 8% in 1992. After, last year the less percentage of Biography books were sold by a salesman. After that, the sales of adult fiction books doubled in 2012.