Today’s children are living under pressure from the society than children in the past. To what extent do you agree or disagree with this opinion?

In present time’s, peers are going through with more strain than in ancient times. As now, the world is full of competition and to survive, children have to work hard. In my discourse ahead, I will enunciate upon ideas in favor of my belief.

In today’s world, children are living under more stress. Major factors of this are mainly arisen due to hike in parents expectations from their wards. They compare their wards with more intelligent people by sharing their stories and ask children to become like them. As the competition is at a high peak, studies are also becoming harder day by day. Thus, this consequence and lead to a negative impact on children’s mind, For instance, A recent survey has been conducted where 78% of pupils are being suffered from migraine disease. Today’s children are living under pressure from the society than children in the past. To what extent do you agree or disagree with this opinion

In past, subjects were quite easier and a competition was less but in today’s world, as living standard is increasing day by day so as to meet that, teachers and parents enforce undergraduates to achieve high percentage otherwise they would be punished. This has created an adverse impact on pupils as those who won’t be able to attain expected marks, commit suicide due to fear. To exemplify, news has been shown in times of India that 27% of undergraduates commit suicide, just because they did not score well in exams.

to conclude, to bring out children mm stress and mental issues parents should make a practice of not comparing them with other people and avoid high expectations. Otherwise, it will lead to an unfortunate brunt. Today’s children are living under pressure from the society than children 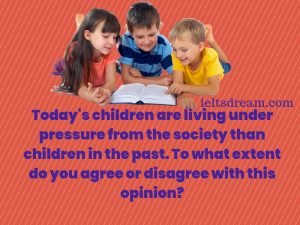