Some people believe that trade and cultural relationships between the countries is a positive development, while others disagree. Discuss both the views and include your own opinion.

It is true that many countries in the world are connected through trade and culture exchange programs, which results in many positive outcomes relationships. However, others are disagreeing with it. In this essay, I will discuss both the views and present my support for the former view.

On the one hand, Some people believe that this relationship is biased towards wealthy nations. This is because of a majority of the developing countries are depending on agriculture and lack advanced technologies. Hence, in trade, they receive less amount of foreign reserve in comparison to the amount they have to pay to acquire any new technology. This could result in further debt on their economy. For example, in Afghanistan, one of the top producer and exporter of dry fruits lacks basic facilities and to buy basic technologies, they are paying more than their earing. Hence, their trade deficits are always increasing and they always remain in debt of first world nations.

On the other hand, I believe such relationships are the platform for the majority of the countries to promote their country, culture, products, and remove any barriers between them. For instance, India has granted a Most favored nation status to the SAARC countries, which helps them to trade at a lower tariff between these countries. In addition, the cultural exchange programs help them to promote tourism and culture of their respective. As a result, the demands at a lower cost but also such relationships help them learn different things from each other. Eventually, these countries support to increase their GDP through liberal trades and promoting tourism.

In conclusion, although there are possibilities of an imbalanced relationship between two countries I believe the positive aspects outweighed any or all of the negatives in this phenomenon. 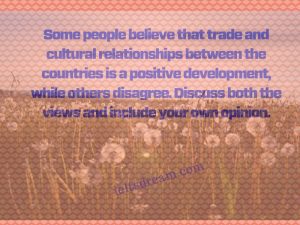