Compare the advantages and disadvantages of three of the following as media for communication and state which you consider to be the most effective.

Along with the proliferation of diversified media in our lives, it is increasingly necessary to distinguish the merits and demerits of every and each media channel so that one can obtain a clear picture of them and then take better advantages of the effective media to his or her daily living. Personally, I choose mainly to discuss books, the radio, and television which are specifically mentioned below in when they were invented.

Among the three, books have comparably first come into practice in the civilized history. For a pretty long time, it has been favored by millions of people for its significant function in spreading knowledge. And later, the advancement of the book-producing industry gave rise to a considerable level of popularity of book which was again welcomed by people for its entertaining benefits. However, the constant advent of creative media tools like radio or television has weakened the effects of books and in the meantime made it exposed to its manifest drawbacks like an inconvenience, boring contents and costly price.

As for the radio, it was once called the most essential invention around the world and warmly praised by listeners on the grounds that the radio is more vivid and cheaper compared to books. Also, If one owns that little box- like stuff, he or she can receive tons of information over the nation or even in the foreign countries by just sitting at home, and what is more, it doesn’t cost you anything other than the purchasing cost. The fact that almost every family owned a radio after its coming to the market can surely illustrate the glamour of radio. Nevertheless, the radios are soon overshadowed by the widespread of televisions.

Television, in this day and age, as an indispensable part of normal life, has exerted substantial influences on human society. From black and white to colored televisions, from huge-sized to portable and liquid crystal televisions, the progress and breakthrough in television industry have a direct link with the changes in people’s lifestyle and improvement in a living standard. We are enjoying the up to date information by watching soap opera by simply switching the remote control to another channel. Further, equipped with proper stereo set and DVD facility, we can just throw ourselves to a comfortable couch appreciating the film just like in a theater. The only trouble here seems to be numerous advertisements that cannot be skipped.

To conclude, television is, of course, the most effective media among the three simply by taking a look at the frequency of these three means being used every day. However, accompanied by the amazing update of high technology, it might be possible in the future that people use PC which can download e-book and TV programs and also has a radio receiver.

We live today in an electronic information age. It is easier to be connected by technology, yet many people still seem distant from each other and feel unhappy in their lives. Discuss.

The space travel to the moon cited the words” a step of the mankind”. someone thought it has made little influence on our daily life. To what extent do you agree or disagree with this opinion? 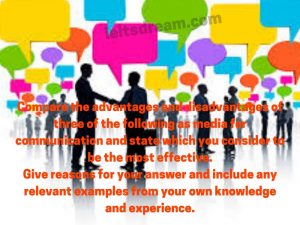