In recent years, with the increasing exchanges, we have had between countries in terms of culture, we are more exposed to the international media and receiving tons of information from sources such as TV  and the internet on a global scale. Benefited from the versatility of information they can get, a growing number of people have shown concern to violent content contained in such media and posed a question to how negative this could be, and whether the government should control it from going even more prevalent.

It is a fact that we can not ignore that violence in the international media has indeed brought certain negative influence to the public. And this has exerted a strong influence on children and teenagers who still haven’t developed a mature sense of judgment and are prone to all possible changes. A quite remarkable amount of young people have developed distorted personalities and even committed crimes thanks to the early exposure to the media violence which is often dramatized in an exaggerated way for the purpose of getting the attention of its audiences.

In this sense,  the public has every reason to call on the government to tackle this problem in the best possible way. It may seem a bit going too far to cut off all the violence-related content all of a sudden and for good, what seems to be the best solution is to rate the programs on the various kinds of media and carry out restrictions to certain individuals to the kinds of contents they can get access to. Underage people should be well warned against any violent content and even adults should be advised as to whether or not they should watch them, and discretion should be strong if they choose to go for it.

To conclude, the public should enjoy the freedom to have access to all sorts of information in the media. And media should present them to the world in a candid and unbiased way as their responsibility. however, it will be in our best interest to understand things around us while not becoming part of the tragedy we have been trying to avoid and diminish.

The government should control the amount of violence in films and on television in order to decrease violent crimes in society. To what extent do you agree or disagree with this point of views? 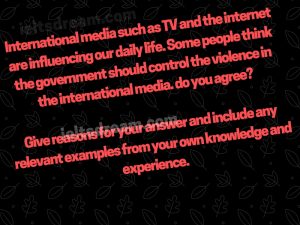