English is spreading very fast in Today’s word. To what extent do you think the advantages of this situation outweigh its disadvantages?

Give reasons for your answer and also include any relevant examples from your own knowledge and experience.

Nowadays, the English language is prevalent in the international political, economic and cultural fields. moreover, it has been consolidation its status as the most-studied tools of communication in hundreds of thousands of educational institutions. Yet in the meantime, the dominant role of English has long been a hotbed of spirited debate, not just within the linguistic academia, but also in the press as well as the general public. As I see it, the boons brought about by the spread of English far outweigh the banes.

Granted, the proliferation of English does not come without drawbacks first, it renders a host of indigenous languages obsolete. According to a recent study conducted by UNESCO, over 200 ethnic languages went extinct in 2005, chiefly due to the linguistic assimilation of ethnic minorities into the English language. Secondly, the expansion of English erodes the cultural identity of other races. specifically, the prevalence of English has a chilling effect on the purity of other languages, which in turn, aggravates the sense of cultural inferiority among the non- native speakers of English.

Nevertheless, the proliferation of English can create even the biggest benefits. To start with the English as a Global Franca makes for cross-cultural communication. Now To example, today eight in every ten international conferences designate English as their chief working language; and ninety-eight percent leading scientific journals in the world are published in the English version. Further, the extensive use of a common language has a unifying effect on people who do not speak the same mother tongue.  Common sense and our experience as humans inform us that language barriers naturally engender distrust while a shared language makes for a sense of belonging. lastly, the expansion of English also enables people whose native tongue is not English to appreciate the English-speaking cultures more efficiently and more fully.

For instance, English learners can read the English literature in the original language, can comprehend Hollywood blockbusters without having to read the subtitles do not have to rely on exclusively upon body language while touring English speaking destinations.

In conclusion, The linguistic dominance of  English has created some adverse effects on world cultures. Nonetheless, its spread has produced even are blessing to our lives. On balance, I am convinced that we should sustain the extensive use of English as a global language while at the same time do our almost to honor and preserve other languages and cultures.

Countries around the world will be facing significant challenges relating not only to the environment but population and education as well. what problems will your country face in the next ten years? how can these problems be overcome? give reasons for your answer and include any relevant examples from your own knowledge or experience. 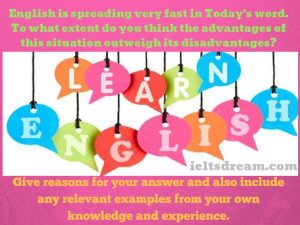 1 thought on “English is spreading very fast in Today’s word. To what extent do you think the advantages of this situation outweigh its disadvantages?”