Learning about the past has no value for those of us living in the present.

To what extent do you agree or disagree?

Give reasons for your answer and include any relevant examples from your own knowledge or experience.

It is inevitable that the modern technological world is better them the past time. But there are some other values which are always remained with human beings from their accent time to present such as moral value for modern people to learn about older time. In my opinion, the past time has its own value because it encourages us to do improvements in several aspects such as in the medical field. There are several reasons behind it and I will elaborate these causes in the following paragraphs of this essay.

The first and foremost reason behind it is to learn from the past. In other words, sometimes we have to remember or revise the ancient situations in order to do better for further time. For instance, when scientists invent a useful treatment or any medicine then they study the older researches made by other ancient scientists. By learning from past researches, they innovate methods more and more and produce a particular medicine for the dangerous ailment.

The next reason is avoiding past mistakes. For instance, In India, The Nokia Company which has launched their Cell phones for many years. This company was doing a lot of mistakes in the technology field because they did not rub companies. But this year, this Company management has changed marketing policies and launched a new innovative smartphone at a reasonable price. Users like this product. So, management can learn from its past and avoid earlier mistakes.

To conclude, People who have a value of past time can “Kill two birds with one stone.” Because they can gain experience by learning from earlier mistakes and transfer its next generation, as well as human beings, can perform better to produce medicines to cure serious disease. I believe mankind live a better life avoiding those mistakes which they di in their past time. 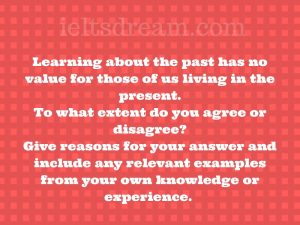