Measures have been put in place to improve road safety by reducing the speed limits. Some people believe there are better alternatives. Discuss both views and give your own opinion.

Measures have been put in place to improve road safety by reducing In the recent years, the number of vehicles has increased exponentially on roads, while authorities have taken steps to improve road safety by restricting speed limit. However, some people think that there are other options which can improve safety on road. I will discuss both the views and present my support for the latter view.

On the one side, the government has taken measures by limiting the speed of the vehicles. This is done on the basis of a number of accidents happened due to over-speeding. For instance, according to the report of the transportation department of India, the majority of the casualties happened on roads due to rush driving in 2017. Hence, to overcome it, controlling the speed of vehicles is considered as the best alternative. However, this does not seems to be a practical solution as there is no mechanism to monitor the speed of each and every vehicle on roads, and if it is restricted on source i.e. ( No abbreviations) At an auto manufacturer level, then it can impact the auto industry. Measures have been put in place to improve road safety by reducing

On the other hand, after considering the drawbacks of restricting speed limit, I believe that the concerned department should look out for other options. Firstly, To improve the road safety, authorities should segregate roads into extremely dangerous, risky and safe roads and color them with red, yellow, no color respectively. In case, if any drive misses out a signboard then they can easily identify the risky zone by the color of the road.  Secondly, rules are already in place but it should be followed diligently.  For instance, a helmet is mandatory for two-wheeler drivers in India but the majority of the drivers are not following it. In fact, traffic police are also not bothered about implementing this rule except for a week during the safety week program. Evidently, if these rules are followed properly then also it will improve the safety on road in a drastic way.

In conclusion, although reducing speed can improve road safety by a certain extent but it does have some negative aspects associated with it. Hence, I would argue that considering other options like imposing current law in a right way with identifying the risky zone will improve safety in a greater way. Measures have been put in place to improve road safety by reducing 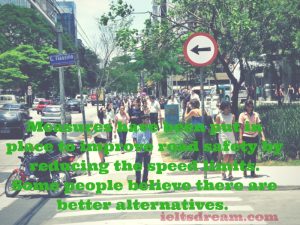