Some people think sending criminals to prison is not an effective way to deal with them. They think education and training are better. To what extent do you agree or disagree?

The way to punish lawbreakers is a worthwhile discussion for it is closely connected with social stability. Ca we fully justify the suggestion that prison penalty is an effective way to crack down on criminals? Personally speaking, I rather doubt the validity of this practice.

In addition, sending all the criminals to prison imposes a huge burden on any government. With a limited budget, the authority has to cover lots of areas which are in great need of money, such as traffic, poverty, and the environment. In contrast, those criminals in the prison will have to be provided with food, shelter, and necessary entertainment, which undoubtedly consume expenditures. Inescapably, that spending will exert a negative impact on more efficient solutions to other social urgencies.

The most worrying aspect is the possibility that delinquents in prison will be afflicted with an inferiority complex and psychological shadow. Disheartening circumstances where criminals cluster together and harsh penalties are practiced always impress inmates in a depressive way that they have done something really terrible and others and society as a whole will look down upon them no matter how diligently they reform. If so, can we believe natively that one day they can turn a new leaf and make a great contribution to society after being released? Furthermore, the majority of studies reveal that certain hardened criminals will resume committing crimes even after years of being confined in prison.

In conclusion, the ultimate purpose of all punishment is to restore justice, the penalty being not just for penalty’s sake. What we desire is that those who have gone astray will realize their errors and learn proficiency in a particular line, So maybe education and training are better than sole prison punishment.

Intelligent machines such as robots are widely deployed to take place of human beings. discuss the advantages and disadvantages of it.

Some people think computers do not help children to learn more effectively, on the contrary, their usage has a negative effect on both the physical and mental development of young people. To what extent do you agree or disagree? 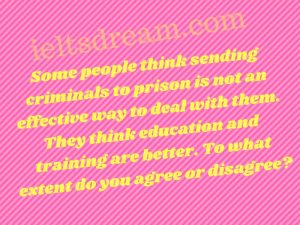