Some people think that the government should decide the subject for students to study at university. Others believe that students should be allowed to apply for the subject they prefer. Discuss both views and give your opinion.

With the current emphasis on individuality in education, many people are against the traditional practice of compulsory courses. they believe that the subjects one chooses to study should be left to the individual to decide rather than the government. In this essay, I will discuss this topic from the following two aspects.

on one hand, being the biggest supporter of the educational system, the government should have the right to decide what students learn. Franklin once said that educated people were easy to govern and hard to enslave, which clearly reveals that the aim of education to a country is to cultivate its labor force to be better citizens so as to improve its national strength. Consequently, it is wise for the government to list the necessary courses for students to upgrade the population quality.

On the other hand, besides the compulsory courses decided by the government, people are entitled to choose whatever subjects appeal to them. Different subjects have different impacts on one’s life. History makes people wise; poems make them witty; mathematics gives them logically; philosophy makes them deep etc.

Generally speaking, people study for different reasons and various intentions. Some people study because they believe certificates, diplomas, and degrees are held up a status symbol and a passport to a private club of money and power. others study for our country and the subjects were chosen by the government will not only benefits our life but also the future of a nation.

University graduates receive higher salaries than those who have a lower education, therefore some people say such students should pay for all their tuitions fees. To what extent do you agree or disagree?

Some people get into debt by buying things they don’t need and can’t afford. what are the reasons for this behavior? what action can be taken to prevent people from having this problem? 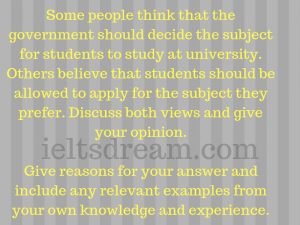