Some people think that there should be strict laws to control the amount of noise a person makes because of the disturbance it causes to people.

Noise pollution disturbs the general population and hence some people insist that there should be strict regulations to control the amount of noise an individual can create. In my opinion, there are several advantages to enacting these kinds of laws, there is an equal number of disadvantages too.

Noise pollution has become a major issue in the cities around the world.  If there are laws to reduce the noise levels, the public will benefit in many ways. Firstly forcing strict laws to control the noise levels could improve the productivity of the population because it enables them to get undistributed sleep which is important for their overall health and construction levels. It goes without saying that loud music at late night parties disturbs the entire neighborhood and deprive them of the much-needed sleep. If there are strict laws to control the menace, noise pollution will reduce dramatically.

On the flip side, these laws alone will not help. The government will have to form special squads to ensure that noise levels are within the permitted limits. Making do with the existing forces is not a viable solution because emergency police personnel cannot be summoned to stop a late night party just because it has exceeded the noise limits. Formation of such squads can be a burden on the exchequer and consequently, the government will have less money to spend on more serious issues like crime and violence. Another thing to consider is the impact of such laws on festivals and cultural celebrations. But taking measures like imposing a ban on noisy firecrackers or instruments can make these occasions less lively and vibrant. This may have a negative impact on the culture.

In conclusion, It is important for the authorities to enact laws to control noise pollution. However, Certain exceptions have to be made to ensure that people enjoy their life. 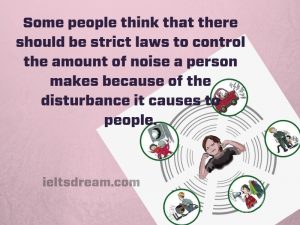