The chart below shows information about Heart Attacks by Age and Gender in the USA. Summarise the information by selecting and reporting the main features, and make comparisons where relevant. 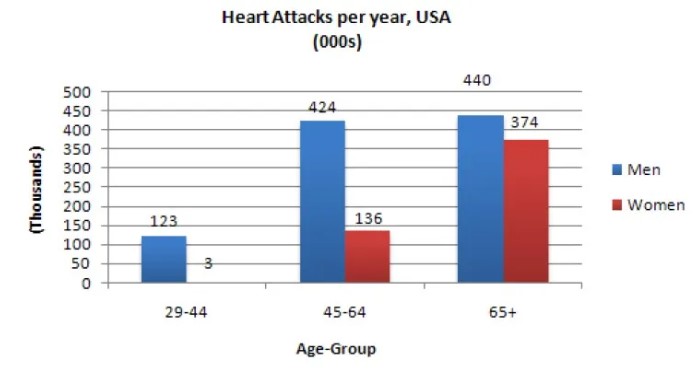 The bar chart illustrates the information regarding the different age groups of male and females heart attacks problem in the United Kingdom. The data has been calibrated in thousands.

Looking at the overall perspective, it is readily apparent that the older men’s rates rose sharply, shared by an upward trend, whereas younger females showed a minor context.

It is crystal noticeable that the older males rose rapidly and reached approximately 440 thousand. Apart from it, in the 29-44 age group, men’s heart attacks rate was least rather than others. Then, the 45-64 age group and 65+women were shown a minor difference, respectively.

Turning towards the remaining data, the aged women were almost 374thousand. After that, the younger females were half as compared to 65+ aged women who were reached at 136 thousand. In contrast, the men’s heart attacks trend was higher, and the adult males were minimum.