The graph shows underground station passenger numbers in London. Summarise the information by selecting and reporting the main features, and make comparisons where relevant. 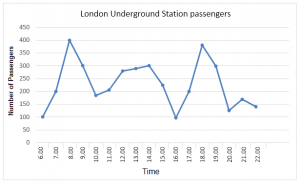 The provided line chart illustrates the information about the numbers of underground station passengers in London from morning to night time.

In the following two hours till 16:00 pm numbering on passengers was declined to a lower point which was only 90 travelers. Then there was a sudden increase came in the numbers of passengers. At this time at 18:00 pm, about 380 people were traveled through underground stations. Till the following four hours numbers of underground

Also Read The bar chart below gives information about vehicle ownership in China.

Details of Politicians Private Lives Should Not Be Published in Newspapers