Well, I am an early bird because it made me feel peaceful, optimistic and creative. I also love to do exercise in the morning time because it helps me to feel refresh and energetic the whole day. However, here I would like to talk about a situation when I woke up extremely early around 2:30 o’clock.

Last year, I had a summer vacation so, I had planned to go to Manikaran Sahib with my family. It is situated in Himachal Pradesh and approximately 400 kilometres away from my hometown. We decided this place because, in the summer season, there is scorching heat in the Northern part of India. It is too far from my hometown so, it was quite important for us to start our journey as early as possible. A day before, I had finished all packing as well as put multiple alarms on my mobile phone to get up early in the morning. 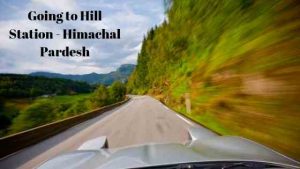 As my alarm beeps In the morning , I woke up and help with my mother to prepare food which we bring with us for travelling. Luckily, the car driver reached on time and we started our journey around 3 o’clock.

There were some reasons, why I got up extremely early. First of all, with the help of it, we escape from the scorching heat of the Sun. secondly, travel early morning means there is no traffic jam or no pollution on the roads. As a result of it, one can drive very safely as well as smoothly. Apart from it, we were halted at two other stations in between our journey and it was possible only because of early traveling. Last but not least, we reached our destination on time and enjoyed the ritual of the Sikh Temple.

All in all, that was the time when I got up extremely early.

Sample 2 ( Get Up early Due to An School Exam )

Well, usually I get up around 6 o clock in the morning time. But sometimes, I have to get up extremely early due to some emergencies. And here I would like to share a situation when I had to get up at 3:00 a.m. I explain it briefly.

Once upon a time, there was my surprise test of English subject. During that time I was a school going, kid. On the time, to prepare for the exam, I had to get up so extremely in the morning. Actually, one day, I took a leave from school due to my health issues. I had a fever at that time. so I could not go to school. Unfortunately, at the same time, my class teacher told to everyone for a sudden test the next day. I did not know about this test. Fortunately, by the grace of God, my friend Lovepreet informed me about this test. I thanked her for this information. But I was worried about this task. 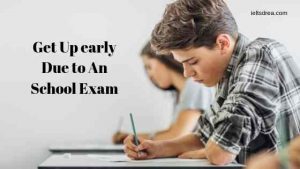 Sadly, I was unable to study the notes English subject on that day because of my fever. So I decided to do it the next morning. So on the next day, I got up at 3 o’clock and started reading study notes. I did the revision of the english curriculum because before that time I learnt it properly.

So on that day, I performed very well in my exam and got the first position in my class.  My teacher appreciated me as well as he gave me a set of notebooks as a reward for my best performance in the English exam.

I was on the Cloud Nine. In the present scenario, whenever I recall that memory, I feel highly elated and get motivation. Overall that was the time when I got up extremely early. I believe, it has proved fruitful for me.

What do you think getting up extremely early in the morning can create problems for others?

Yes definitely, sometimes, a few number of persons start making noise after getting extremely early in the morning. They start listening loud music on music system. This thing in not only hurt their family members but also neighbors.

Do you think doing study in early morning time is beneficial for students?

Yes of course. Morning time is more peaceful rather than other times of day. It helps pupils to concentrate on their study in a peaceful manner. Before giving exams, many children revise study notes in the morning time to keep it in their mind properly. Sometimes, I also follow this idea.

Have you make noise in home when you get up extremely early?

No not at all, I believe that it is considered as a bad manner. If I get up extremely early in the morning, then I do my work in peaceful way without creating any disturbance.

Do you think you will follow your routine of getting up early in the morning in future as you do in the present time?

Yes, I will follow it as same as I am doing it in the present scenario because I am habitual of it. So, I will continue it in my future time.